I have a poetry section as part of the larger aviation quotation collection, but this classic poem deserves it’s own page.

Oh! I have slipped the surly bonds of Earth
And danced the skies on laughter-silvered wings;
Sunward I’ve climbed, and joined the tumbling mirth
Of sun-split clouds, — and done a hundred things
You have not dreamed of — wheeled and soared and swung
High in the sunlit silence. Hov’ring there,
I’ve chased the shouting wind along, and flung
My eager craft through footless halls of air.

Up, up the long, delirious burning blue
I’ve topped the wind-swept heights with easy grace
Where never lark, or ever eagle flew —
And, while with silent, lifting mind I’ve trod
The high untrespassed sanctity of space,
Put out my hand, and touched the face of God.

I think this is the most authoritative transcription of the poem, posted exactly as it appears in the 1989 book Respectfully Quoted: A Dictionary of Quotations Requested from the Congressional Research Service published by the Library of Congress. They note:

“The reprintings vary in punctuation, capitalization, and indentation from the original manuscript … Some portions are faded and difficult to read, but the version above follows Magee’s as exactly as can be made out, following his pencilled note on another poem, ‘If anyone should want this please see that it is accurately copied, capitalized, and punctuated.’ Nearly all versions use ‘ … even eagle,’ but to the editor’s careful scrutiny, it was ‘ever,’ formed exactly like the preceding ‘never.’”

However, the first known publication of High Flight was 12 November 1941 in the Pittsburgh Post-Gazette newspaper, and it uses ‘even’ not ‘ever’. The 1942 Magee biography by Hermann Hagedorn, Sunward I’ve Climbed, uses ‘even’. The 2013 book High Flight: The Life and Poetry of Pilot Officer John Gillespie Magee by Roger Cole uses ‘even’. And High Flight expert Ray Hass, who has spent decades researching the poem, considers the correct transcription to be ‘even’.

Here is a scan of the original, written on thin blue airmail paper, now in the Library of Congress: 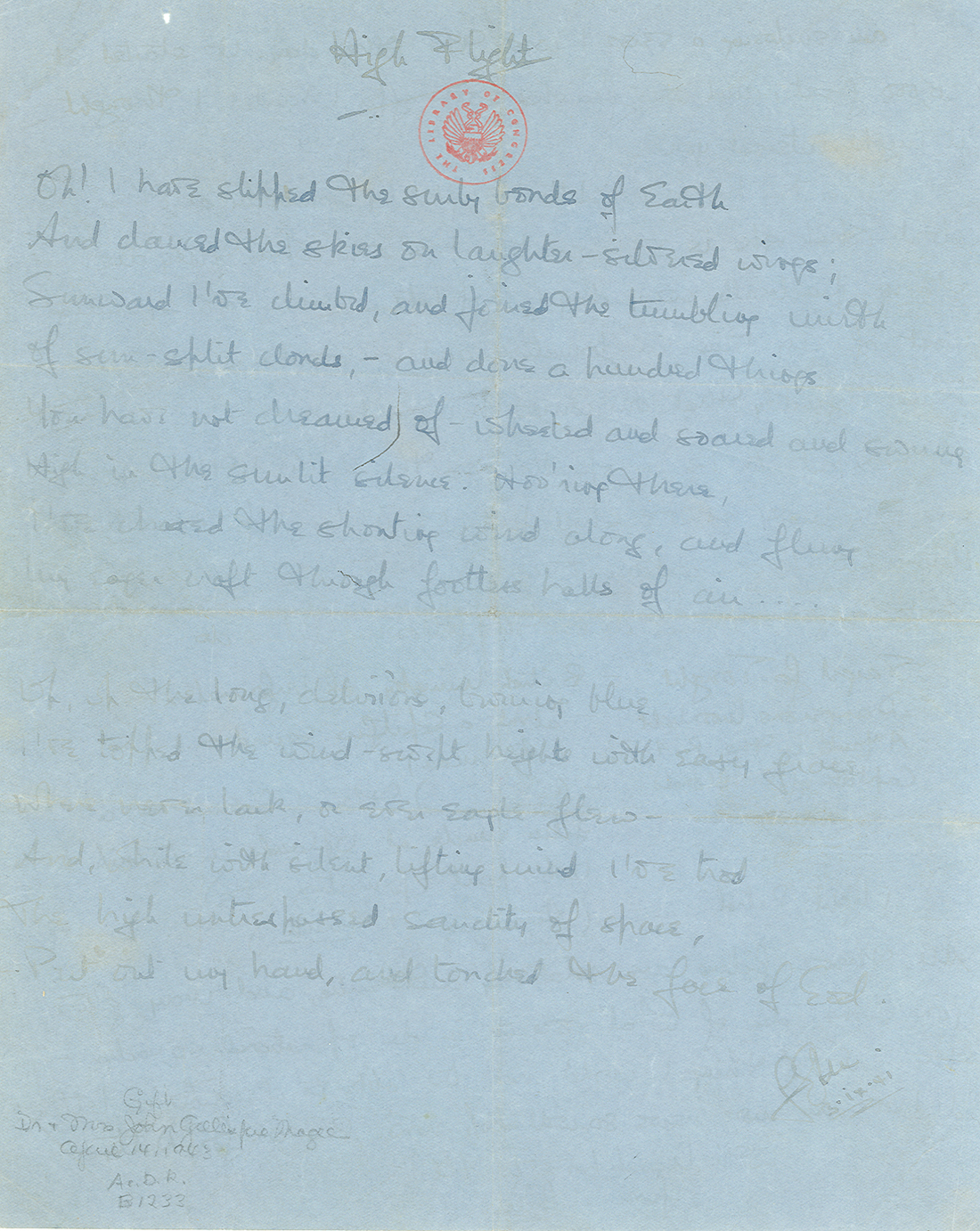 So what’s High Flight’s history? Well, during the desperate days of the Battle of Britain, hundreds of Americans crossed the border into Canada to enlist with the Royal Canadian Air Force. Knowingly breaking the law, but with the tacit approval of the then still officially neutral United States Government, they volunteered to fight the Nazis. John Gillespie Magee, Jr., was one such American.

He was born in Shanghai, China, in 1922 to an English mother and a Scotch-Irish-American father, Magee was 18 years old when he entered flight training. Within the year, he was sent to England and posted to the newly formed No 412 Fighter Squadron, RCAF, which was activated at Digby, England, on 30 June 1941. He was qualified on and flew the Supermarine Spitfire. 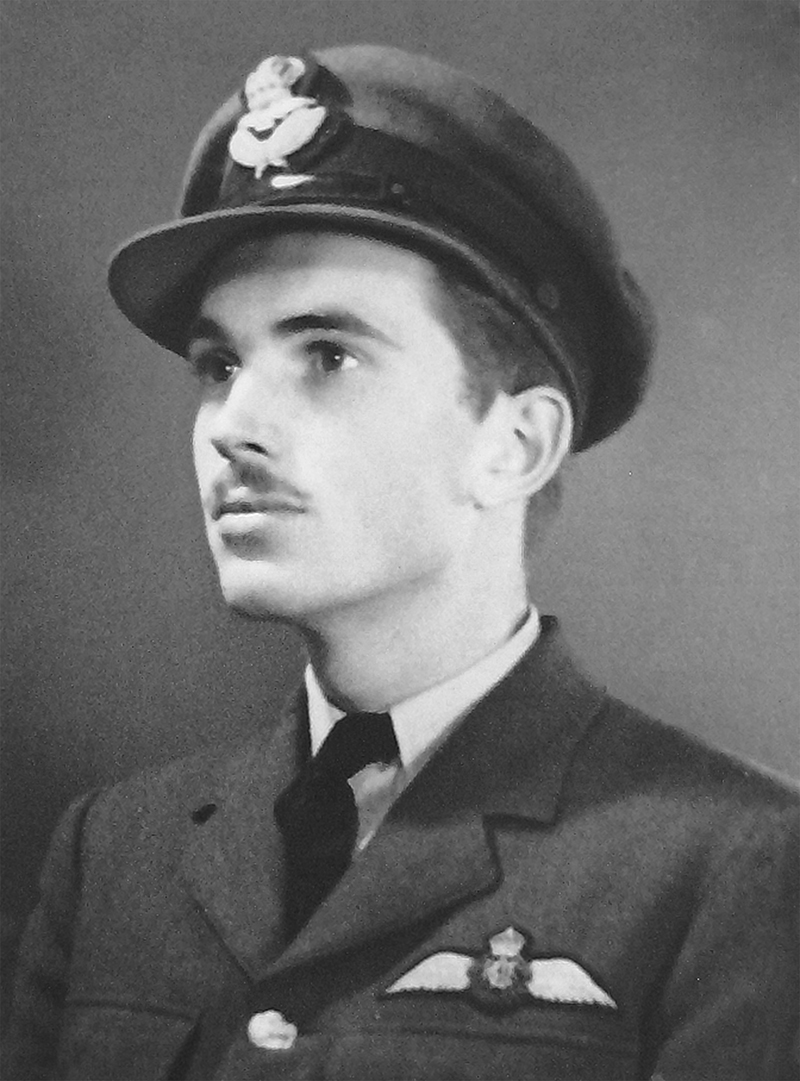 On 18 August 1941, Pilot Officer Magee flew a high altitude (33,000 feet) test flight in a Spitfire Mk I. As he orbited and climbed upward, he was struck with the inspiration of a poem — “To touch the face of God.”

On 3 September 1941 he wrote a letter to his parents. In it he commented, “I am enclosing a verse I wrote the other day. It started at 30,000 feet, and was finished soon after I landed.” On the back of the letter, he jotted down his poem, titled High Flight. 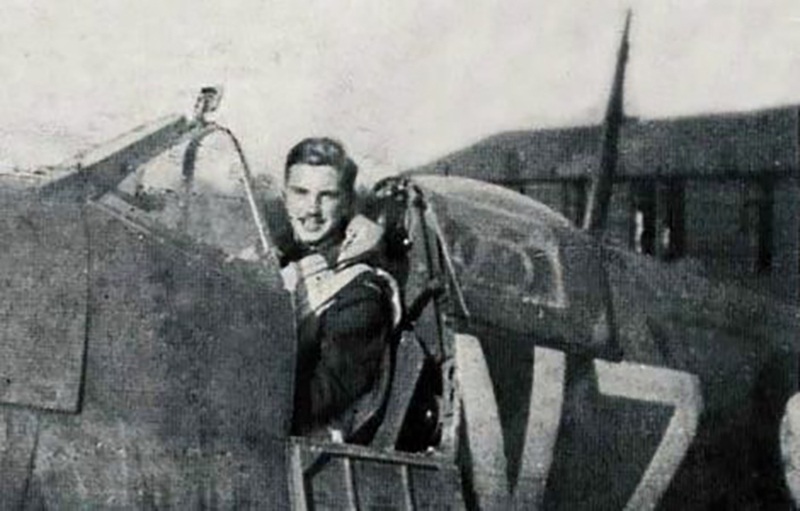 Just three months later, on 11 December 1941 (and only three days after the US offically entered the war), Pilot Officer John Gillespie Magee, Jr., was killed. The Spitfire V he was flying, registration VZ-H, collided with an Oxford Trainer from Cranwell Airfield flown by one Ernest Aubrey. The mid-air happened over the village of Roxholm which lies between RAF Cranwell and RAF Digby, in the county of Lincolnshire at about 400 feet AGL at 11:30 in the morning. John was descending in the clouds. At the enquiry a farmer testified that he saw the Spitfire pilot struggle to push back the canopy. The pilot, he said, finally stood up to jump from the plane. John, however, was too close to the ground for his parachute to open. Both pilots died instantly. Magee was 19 years old.

Part of the official letter to his parents reads, “Your son’s funeral took place at Scopwick Cemetery, near Digby Aerodrome, at 2:30 P.M. on Saturday, 13th December, 1941, the service being conducted by Flight Lieutenant S. K. Belton, the Canadian padre of this Station. He was accorded full Service Honors, the coffin being carried by pilots of his own Squadron.” Magee still rests in that registered war grave at Holy Cross Cemetery, Scopwick in Lincolnshire, England. On the gravestone are inscribed the first and last lines from High Flight. 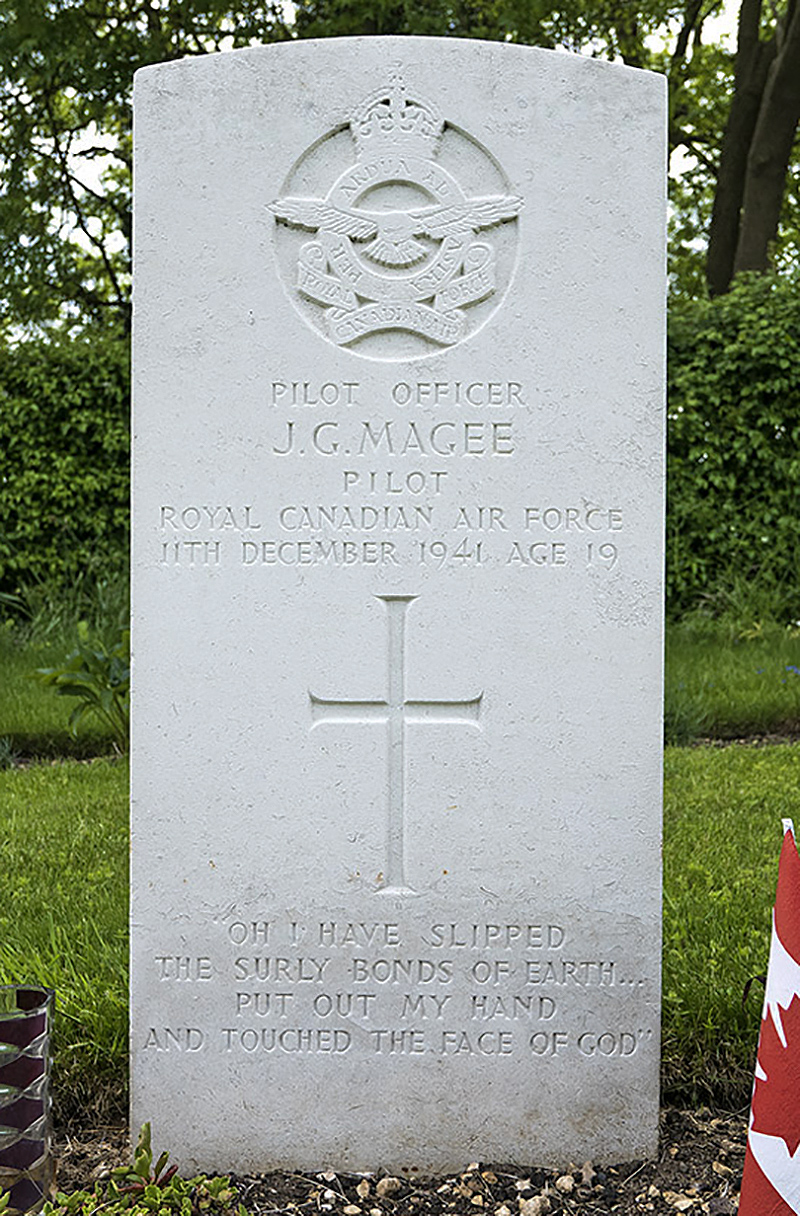 Magee’s father, then curate of Saint John’s Episcopal Church in Washington, DC, reprinted the poem in church publications. And it was picked up by newspapers eager for content as the US entered the war. Poet and Librarian of Congress Archibald MacLeish hailed Magee as the first poet of the World War II. On 5 February 1942, the Library of Congress included Magee’s poem in an exhibition called Poems of Faith and Freedom. High Flight shared a case in the exhibit with two noted WWI poems, John McCrae’s In Flanders Fields and Rupert Brooke’s The Soldier. It was the only WWII poem included in the exhibit, and thanks in part to that exposure it quickly became one of the best-known contempory poems. Orson Welles recorded a reading of it on 11 October 1942 for Radio Reader’s Digest. It was widely copied and distributed. These copies vary considerably in punctuation, layout, and capitalization, as I’ve found out from Great Aviation Quotes readers!

High Flight quickly became a favourite poem amongst both aviators and astronauts. It is the official poem of the Royal Canadian Air Force and the Royal Air Force, and has to be recited from memory by fourth class cadets at the United States Air Force Academy. It’s been to the Moon, and is quoted in many books (including God is My Co-Pilot, Carrying The Fire and Failure Is Not An Option.) It was used as the late-night sign-off on US TV stations in the 1950’s through to the mid 80’s. 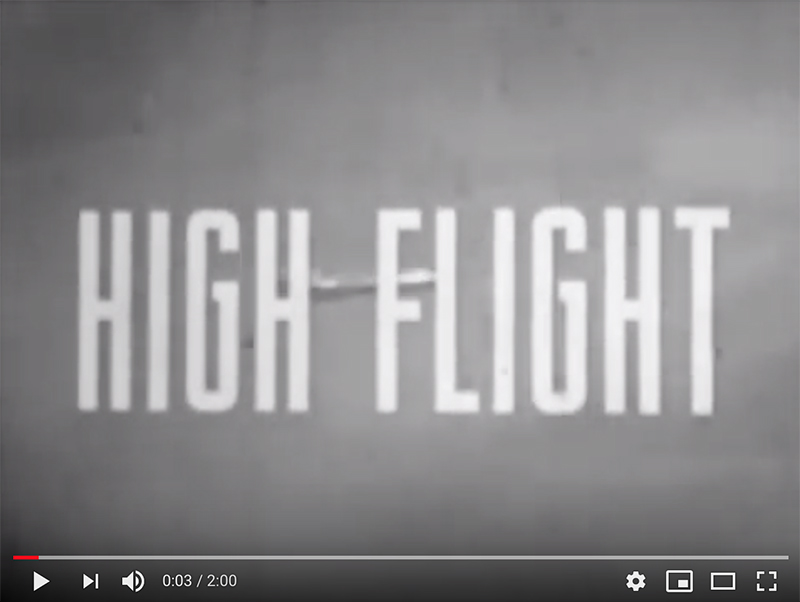 Because of its ubiquity, the poem has been extensively studied, and we can see where some of Magee’s inspiration came from. The last words of High Flight — and touched the face of God — can also be found in a poem by Cuthbert Hicks, published three years earlier in Icarus: An Anthology of the Poetry of Flight. The last two lines in Hicks’ poem, The Blind Man Flies, are:

For I have danced the streets of heaven,
And touched the face of God.

The same anthology includes the poem New World, by G. W. M. Dunn, which contains the phrase “on laughter-silvered wings”. Dunn also wrote of the “lifting mind”, another phrase that Magee used in High Flight, and refers to “the shouting of the air”, in comparison to Magee’s line, “chased the shouting wind”. Another line by Magee — the high untrespassed sanctity of space — closely resembles “across the unpierced sanctity of space”, which appears in the same anthology in the poem Dominion over Air, and was previously published in the RAF College Journal.

Some people have suggested Magee, who wrote the poem after a high-altitude test flight, may have been inspired by the sensation of hypoxia, a lack of oxygen to the brain. Magee’s brother, Hugh, told the BBC that, “I have not heard this theory before but I really think you're onto something there. Poets have often used drink or drugs to see the world in different ways and this makes sense.” (23 February 2007, BBC.)

The same BBC story also contained speculation by RAF medical experts that a physiological effect of flight called the Breakthrough Phenomenon or ‘Big Hand’ may have played a part in Magee’s inspiration. It makes pilots feel remote from their aircraft, causing a third-perso neffect of looking down at themselves in the cockpit, with feelings of doom or overwhelming joy. Air Commodore Bill Coker, head of the RAF’s Aviation Medicine Centre and a poetry enthusiast, said, “I think this is a more likely theory, though you cannot rule out hypoxia’.

Whatever its origins, High Flight has entered the pilot consiousnous. Senator John McCain’s eulogy, read by his daughter Meghan McCain on 1 September 2018, is a good example of how the poem is quoted:

I know that on the afternoon of August 25th in front of Oak Creek in Cornville, Arizona, surrounded by the family he loved so much, an old man shook off the scars of battle one last time and arose a new man to pilot one last flight up and up and up, busting clouds left and right, straight on through to the kingdom of heaven. And he slipped the earthly bonds, put out his hand, and touched the face of God.

More famously, at 5pm eastern time on 28 January 1986, President Reagan consoled a grieving nation by giving one of the most powerful presidential addresses of the 20th century. The original plan was to deliver his State of the Union speech that evening, instead, in a live televised speech written by Peggy Noonan, he talked flying, space, and heroes:

There’s a coincidence today. On this day 390 years ago, the great explorer Sir Francis Drake died aboard ship off the coast of Panama. In his lifetime the great frontiers were the oceans, and an historian later said, “He lived by the sea, died on it, and was buried in it.” Well, today we can say of the Challenger crew: Their dedication was, like Drake’s, complete.

The crew of the space shuttle Challenger honored us by the manner in which they lived their lives. We will never forget them, nor the last time we saw them, this morning, as they prepared for their journey and waved goodbye and “slipped the surly bonds of earth” to “touch the face of God.” 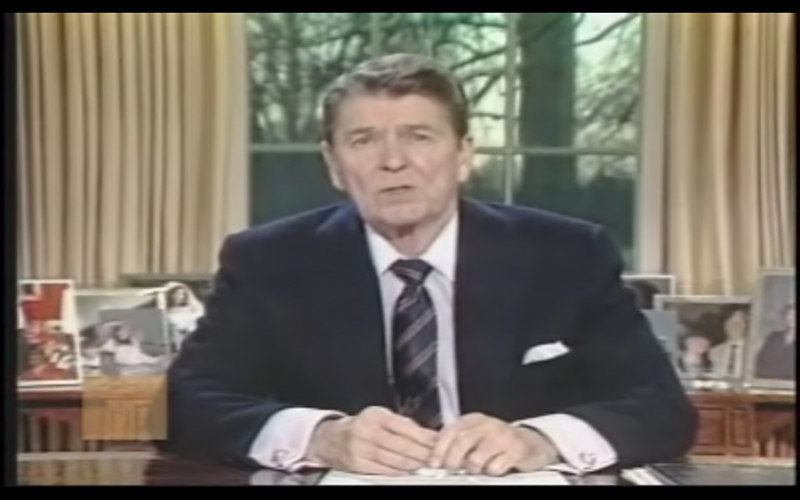 Less famously, part of the poem was used as the title of my first book of aviation quotations, Slipping The Surly Bonds.

If you want to read more about High Flight, there are several webpages and books on the subject. I’m happy to recommend the excellent 2014 book by Ray Haas, Touching the Face of God: The story of John Gillespie Magee, Jr. and his poem High Flight

Didn’t find what you were looking for? There are many more quotes on my Aviation Poetry page and the Magic & Wonder of Flight page. Or try a seach of the entire database: