By far the sadest part of my aviation quotes collection; these are the flying quotations relating to the September 11 attacks on the United States. All times are on East Coast standard time.

I wasn’t flying that day, was at home in my pj‘s, watching it unfold live on TV while my flight attendant girlfriend got ready to fly a trip to New York. Turned out neither of us flew anywhere for a few days. On the first day that airline flying did start up again, I was the captain of a flight carrying the parents of one of the American Airlines pilots who had been hijacked and killed. They were on their way to New York. I had no adequate words, then or now. Sometimes think about deleting this page, but we should never forget.

Should terrorists launch new attacks, we believe their preferred targets will be U.S. Government facilities and national symbols, financial and transportation infrastructure nodes, or public gathering places. Civil aviation remains a particularly attractive target in light of the fear and publicity that the downing on an airline would evoke.

National Intelligence Estimate, 1995. In 1998 and 1999 the FAA intelligence unit further warned that terrorists might hijack a plane and use it as a weapon. Source is the 9/11 Commission report, page 54, redacted when first issued but following a declassification review made public in September 2005.

I wanted to soar through the air.

Nishizawa Yūji, statement to police after hijacking All Nippon Airways flight 61 on 23 July 1999. He forced the first officer out of the cockpit and stabbed Captain Nagashima Naoyuki to death with an 8-inch kitchen knife in order to fly the B-747 himself. Quoted in Newsweek newsmagazine 1 August 1999. The hijacker was a flight simulator fan who wanted to fly a real plane. But this was a clear warning to aviation security officials about the dangers of cockpit door procedures.

The FBI information … indicates patterns of suspicious activity in this country consistent with preparations for hijackings or other types of attacks.

I would like to fly in a professional like manners one of the big airliners. I have to made my mind which of the followwing: Boeing 747, 757, 767, 777 and or Airbus A300 (it will depend on the cost and which one is easiest to learn).

The level I would like to achieve is to be able to takeoff and land, to handle communication with ATC, to be able to successfully navigate from A to B (JFK to Heathrow for example).

In a sense to be able to pilot one of these Big Bird, even if I am not a real professional pilot.

Zacarias Moussaoui, the alleged 20th hijacker, in a 2001 letter written to the Pan Am International flight academy. They guessed him to be a rich playboy, but when when they started training him they called the FBI. Reported (with his exact misspellings) by The New York Times, 8 February 2002.

I know planes, but I don’t know INS.

I knew he wasn’t real pilot material — he had actually studied his manuals and didn’t talk about girls.

I did what I had to do, and you should be very proud of that. It is a great honour and you will see the result, and everyone will be celebrating.

Ziad Jarrah, hijacker on United Airlines flight 93, in a letter to his girlfriend, Ayse Sengun, that was intercepted by U.S. authorities. In the letter he also said that he loved her very much. Dated 10 September 2001.

Either end your life while praying, seconds before your target, or make your last words: ‘There is no God but God, Mohammad is His messenger.’

Translated from written instructions for Mohamed Atta, the terrorist at the controls of AA flight 11.

Okay, my name is Betty Ong. I’m 3 on Flight 11. Our Number 1 got stabbed. Our purser is stabbed. Nobody knows who stabbed who and we can’t even get up to business class right now because nobody can breathe. And we can’t get to the cockpit, the door won’t open.

We have some planes. Just stay quiet and we’ll be O.K. We are returning to the airport … Nobody move, everything will be O.K. If you try to make any moves, you will injure yourself and the airplane. Just stay quiet.

BOSTON CENTER: Hi. Boston Center T.M.U. [Traffic Management Unit], we have a problem here. We have a hijacked aircraft headed towards New York, and we need you guys to, we need someone to scramble some F-16s or something up there, help us out.

NORAD: Is this real-world or exercise?

BOSTON CENTER: No, this is not an exercise, not a test.

US military’s first notification that something is wrong. Joseph Cooper was the Boston Center FAA air traffic controller, on a phone call to Sgt. Jeremy Powell at the Northeast Air Defense Sector (NEADS), which is the regional headquarters of the North American Aerospace Defense Command (NORAD), alerting them of a suspected hijacking of American Airlines flight 11. Boston ARTCC bypassed standard protocols to directly contact NORAD. 08:37 11 September 2011. Quoted in 9/11 Live: The NORAD Tapes, Vanity Fair magazine, August 2006.

What do I tell the pilots to do?

Madeline Amy Sweeney, American Airlines flight attendant, end of her phone call to supervisor Michael Woodward describing the hijacking of AA flight 11. She provided many important details before the plane was crashed into the World Trade Center, 11 September 2001.

TO ALL CAPTAINS AND CREW. SECURITY MUST BE AT TOP OF THE LIST. ALL NEW YORK AIR SPACE IS CLOSED. AAL AIRCRAFT HAVE BE HI-JACKED THIS MORNING AND MAY HAVE BEEN FORCED DOWN. WE HAVE UNCONFIRMED REPORTS THAT UAL IS HAVING THE SAME PROBLEM. WE ARE STOPPING ALL TRAFFIC TO THE NEW YORK AREA.

ACARS message sent to American Airlines flights in air from their dispatchers, 11 September 2011. 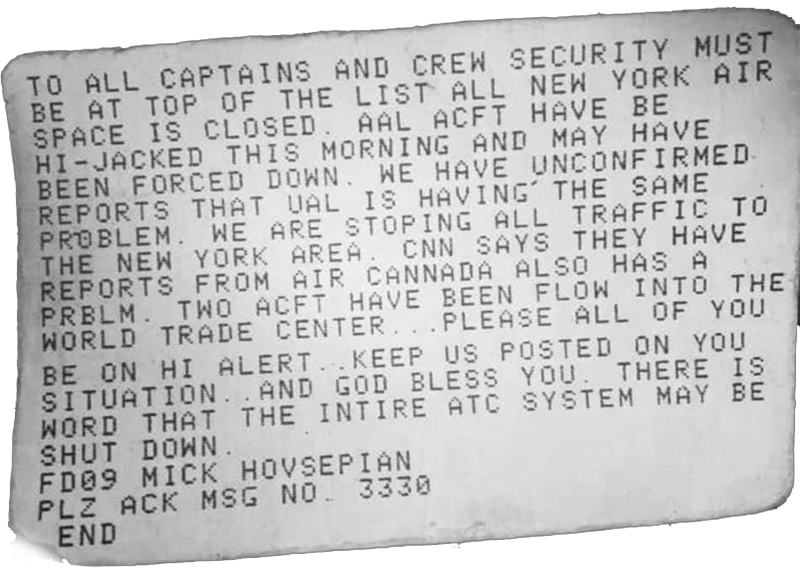 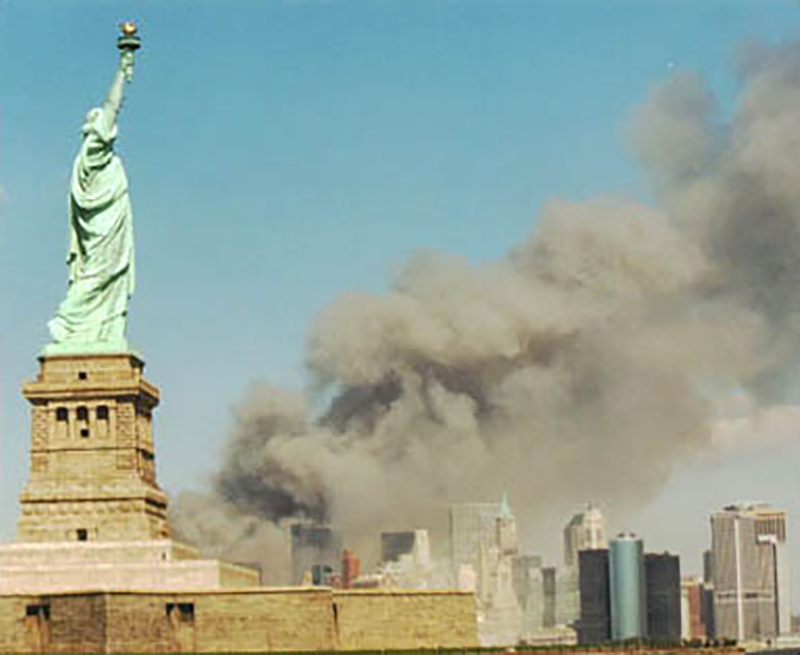 Mayday! Mayday! Get out!

First Officer LeRoy Homer, United flight 93, radio call on Cleveland Center frequency, first indication to the ground that they were in trouble. 09:28 11 September 2001. Cleveland responded “Somebody call Cleveland?” but received no reply. Thirty-five seconds later he transmitted amid background sounds of violence:

Ladies and gentlemen: here the captain. Please sit down, keep remaining seating. We have a bomb on board. So sit.

Ah, here’s the captain: I would like you all to remain seated. We have a bomb aboard, and we are going back to the airport, and we have our demands. So please remain quiet.

A group of us are going to do something.

We’re going to rush the hijackers.

Are you guys ready? let’s roll.

Todd Beamer, Oracle software executive and passenger on United flight 93, last reported words from his cell phone call to Lisa Jefferson, a GTC telephone switchboard operator (he didn't want to worry his pregnant wife). They talked for 13 minutes, during which they discussed the hijacking and recited together the Lord’s Prayer and Psalm 23: “Though I walk through the valley of the shadow of death, I will fear no evil; for Thou art with me; Thy rod and Thy staff they comfort me.” 11 September 2001.

Arabic voice, reportedly toward the to end of the United flight 93 CVR. 11 September 2001.

!FDC 1/9731 FDC SPECIAL NOTICE - DUE TO EXTRADORDINARY CIRCUMSTANCES AND FOR REASONS OF SAFETY. ATTENTION ALL AIRCRAFT OPERATORS, BY ORDER OF THE FEDERAL AVATION COMMAND CENTER, ALL AIRPORTS/AIRDROMES ARE NOT AUTHORIZED FOR LANDING AND TAKEOFF. ALL TRAFFIC INCLUDING AIRBORNE AIRCRAFT ARE ENCOURAGE TO LAND SHORTLY.

First FDC special NOTAM issued by the FAA to pilots on the morning of September 11, 2001, grounding all U.S. flight operations until further notice. Aviation was spelled incorrectly.

Headquarters in Washington demanded to know who gave Ben Sliney the authority to land all aircraft. And then 20 minutes later called back to know why I hadn’t done it sooner.

My recommendation, if we have to take anybody out, large aircraft, we use AIM-9s in the face … If need be.

Anyone flying within 25 miles of the Washington TACAN is authorized to be shot down.

What's the sense of sending $2 million missiles to hit a $10 tent that's empty?

Is it likely that an aircraft carrier or a cruise missile is going to find a person?

It almost isn’t sporting, is it?

Sir Richard Dearlove, head of MI6, the British Secret Intelligence Service, watching one of the first drone strikes in Afghanistan via satellite. Langley, VA, a few weeks after 9/11

I know planes, but I don’t know INS.

The tolerance of the public is diminishing. We’re spending time on the wrong people. It's nutty. There has to be a better way. Why are we stripsearching Aunt Molly from Iowa and letting on Richard Reid?

I never got a lot done using a broomstick. You’ve got to have something that's lethal.

Will someone please explain to me the logic that says we can trust someone with a Boeing 747 in bad weather but not with a Glock 9 millimeter?

I don’t want to be on the list. I want to fly and see my grandma.

It was the advent of the second plane, sharking in low over the Statue of Liberty: that was the defining moment. Until then, America thought she was witnessing nothing more serious than the worst aviation disaster in history; now she had a sense of the fantastic vehemence ranged against her … For those thousands in the south tower, the second plane meant the end of everything. For us, its glint was the worldflash of a coming future.

Terrorism is political communication by other means. The message of September 11 ran as follows: America, it is time you learned how implacably you are hated. United Airlines Flight 175 was an Intercontinental Ballistic Missile aimed at her innocence.

I won’t stop to ponder the motivation of a terrorist, but I will say this: Airlines are the natural enemies of hate. We are the embodiment of the freedom and cross- cultural interaction terrorists despise. Airlines tear down walls, blur borders and help erase ignorant stereotypes. We are the engine that powers the free flow of people, ideas, goods, hugs, fun and love.

Because there are things in this world that are more important than ourselves. Freedom. The Constitution of the United States. Our way of life. Mom, baseball, apple pie; these things and so many more that make us uniquely American. We belong to something greater than ourselves. As complex and diverse and discordant as it is, this thing, this idea called America, binds us together in citizenship and community and brotherhood.

Heather Penney on why she would have done the nearly unthinkable on 9/11. She was a pilot tasked with ramming Flight 93 in her unarmed F-16, probably killing herself and all the airline occupents, before it crashed in a field. Opinion piece Heather Penney, the 9/11 fighter pilot, says celebrating normalcy is a way to honor heroes, The Washington Post, 13 September 2013.

Didn’t find what you were looking for? There are many more quotes on my Airpower page and the Air Combat page. Or try a seach of the entire database: