Nature’s flyers. The avian part of my aviation quotation collection. Birds have to be the initial inspiration for all aviation fans who have watched them soar high and fast above us:

The very idea of a bird is a symbol and a suggestion to the poet. A bird seems to be at the top of the scale, so vehement and intense his life… The beautiful vagabonds, endowed with every grace, masters of all climes, and knowing no bounds — how many human aspirations are realised in their free, holiday-lives — and how many suggestions to the poet in their flight and song!

We are all pirates at heart. There is not one of us who hasn't had a little larceny in his soul. And which one of us wouldn't soar if God had thought there was merit in the idea? So, when we see one of those great widespread pirates soaring across the grain of sea winds we thrill, and we long, and, if we are honest, we curse that we must be men every day. Why not one day a bird!  There's an idea, now, one day out of seven a pirate in the sky. What puny power a man can attain by comparison. Compare a 747 with a bird and blush!

If I were reincarnated, I’d want to come back a buzzard. Nothing hates him or envies him or wants him or needs him. He is never bothered or in danger, and he can eat anything.

William Blake, The Marriage of Heaven and Hell, 1790.

Much talking is the cause of danger. Silence is the means of avoiding misfortune. The talkative parrot is shut up in a cage. Other birds, without speech, fly freely about.

Saskya Pandita, The Middle Way, journal of The Buddhist Society, 1977.

I know of only one bird — the parrot — that talks; and it can’t fly very high.

Wilbur Wright, when asked to speak at a dinner given in his honor at the Aero Club de la Sarthe, 24 September 1908. He declined, saying only this one sentence. He had expressed similar thoughts about self-promotion to the Wright’s financial agent Charles Flint several times:

“Wilbur said to me, Mr. Flint, the best talker and the worst flier among the birds is the parrot.” (Quoted in The Sport of Fying, The Outing Magazine, May 1909.)

The moment Wilbur stood up in Paris to give his now famous ‘parrot speech’ was captured in a photograph: 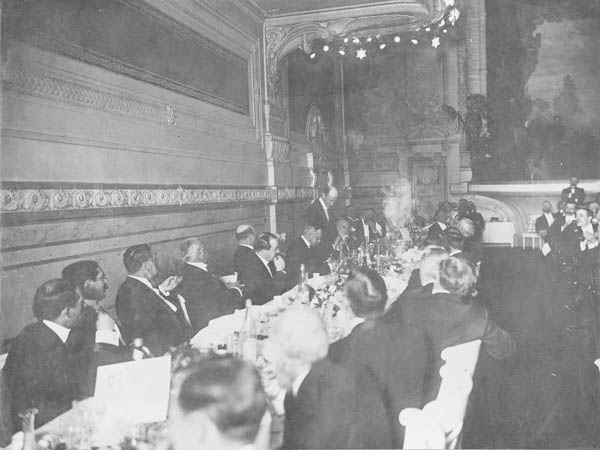 Words are heavy like rocks … they weigh you down. If birds could talk, they wouldn't be able to fly.

Look at that mallard as he floats on the lake; see his elevated head glittering with emerald green, his amber eyes glancing in the light!   Even at this distance, he has marked you, and suspects that you bear no goodwill towards him, for he sees that you have a gun, and he has many a time been frightened by its report, or that of some other. The wary bird draws his feet under his body, springs upon then, opens his wings, and with loud quacks bids you farewell.

John James Audubon, The Birds of America, first published in sections between 1827 and 1838.

I wish the bald eagle had not been chosen as the representative of our country. He is a bird of bad moral character. He does not get his living honestly. You may have seen him perched on some dead tree, where, too lazy to fish for himself, he watches the labour of the fishing hawk; and when that diligent bird has at length taken a fish, and is bearing it to his nest for the support of his mate and young ones, the bald eagle pursues him, and takes it from him …

For in truth, the turkey is in comparison a much more respectable bird, and withal a true original native of America.

King Henry:  But what a point, my lord, your falcon made, And what a pitch she flew above the rest! To see how God in all his creatures works!  Yea, man and birds are fain of climbing high.

Suffolk:  No marvel, an it like your majesty, My lord protectors hawks do tower so well; They know their masters loves to be aloft, And bears his thoughts above his falcon’s pitch.

Gloucester:  My lord, ’tis but a base ignoble mind That mounts no higher than a bird can soar.

I once had a sparrow alight upon my shoulder for a moment, while I was hoeing in a village garden, and I felt that I was more distinguished by that circumstance than I should have been by any epaulet I could have worn.

I hope you love birds too. It is economical. It saves going to heaven.

Emily Dickinson, in a letter to Miss Eugenia Hall, 1885.

Have you ever observed a humming-bird moving about in an aerial dance among the flowers — a living prismatic gem … It is a creature of such fairy-like loveliness as to mock all description.

Seagulls … slim yachts of the element.

But flies an eagle flight, bold and forth on, Leaving no tract behind.

No need to teach an eagle to fly.

Not the cry, but the flight of the wild duck, leads the flock to fly and follow.

You cannot fly like an eagle with the wings of a wren.

Can you imagine any better example of divine creative accomplishment that the consummate flying machine that is a bird?   The skeleton, very flexible and strong, is also largely pneumatic — especially in the bigger birds. The beak, skull, feet, and all the other bones of a 25-pound pelican have been found to weigh but 23 ounces.

Lying under an acacia tree with the sound of the dawn around me, I realized more clearly the facts that man should never overlook: that the construction of an airplane, for instance, is simple when compared [with] a bird; that airplanes depend on an advanced civilization, and that were civilization is most advanced, few birds exist. I realized that If I had to choose, I would rather have birds than airplanes.

Charles A. Lindbergh, during a trip to Africa. Is Civilization Progress?, in Reader’s Digest, July 1964. Quoted in his New York Times obituary, 27 August 1974.

Didn’t find what you were looking for? I have boatloads more quotes on the Magic and Wonder of Flight page and the Miscellaneous Aviation Quotes page. Or try a seach of the entire database: