Poetry about flight can be magical. However this section of the aviation quotation collection quickly grew to became unwieldy, and had to be pruned. The classic High Flight by John Magee has its own page, and I’m including at the bottom of the page some links to several excellent books of flying poetry for everyone who wants to read more.

Poetry is the journal of the sea animal living on land, wanting to fly in the air. Poetry is a search for syllables to shoot at the barriers of the unknown and the unknowable. Poetry is a phantom script telling how rainbows are made and why they go away.


She Was a Phantom of Delight

And now I see with eye serene
The very pulse of the machine;
A Being breathing thoughtful breath,
A Traveller between life and death;
The reason firm, the temperate will,
Endurance, foresight, strength, and skill;
A perfect Woman, nobly planned,
To warn, to comfort, and command;
And yet a Spirit still, and bright
With something of angelic light.

William Wordsworth, She Was a Phantom of Delight, third and final stanza, written in 1803, published in 1807. But clearly he was thinking about airplanes! 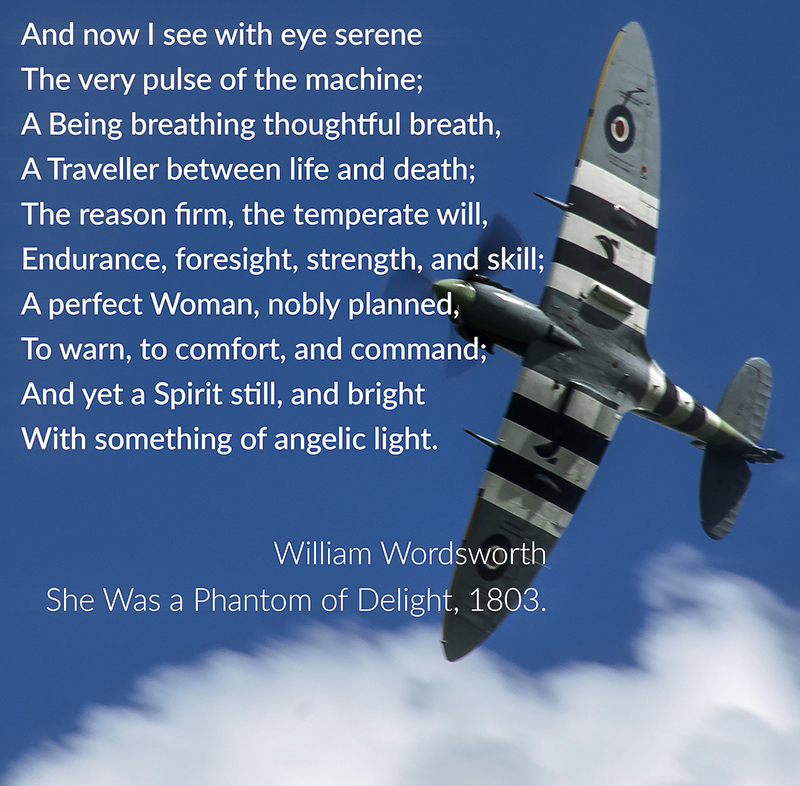 Poor Icarus!—to soar so high,
Then fall! For you 't was vain to try
⁠By cunning craft, on faithless wings,
⁠To capture empyrean things
That still to men the Fates deny!

Yet, even knowing Death so nigh,
Had you reluctant been to fly
⁠Beyond earth's sure, safe harborings,—
⁠Poor Icarus?

I think not so. All, all must die!
But you the pathways of the sky
⁠Found first, and tasted heavenly springs—⁠Unfettered as the lark that sings
And knew strange raptures,
though we sigh:
“Poor Icarus!”

Florence Earle Coates, The Unconquered Air, and Other Poems, 1912.

Come to the edge

Breathe deep, mine eyes, the frosty saga of eternal suns
From unseen depths and dreams undreamt,
I sing the gleaming cantos of unvanquished space
By thought I embrace the universal
With wings of mind I sail the infinitude
Glory! ’tis the stars which beckon man’s spirit and set our souls adrift!

Yoko Ono, 1967. From an untitled demo recording made in 1967 before Yoko and John got together. The completed song appeared on Yoko’s 1973 album Approximately Infinite Universe. 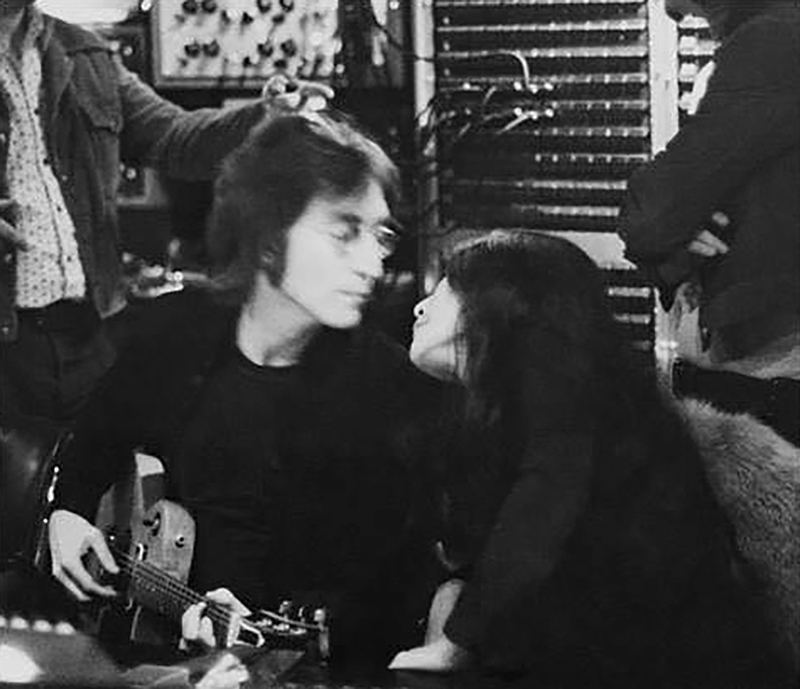 Hold fast to dreams
For if dreams die
Life is a broken-winged bird
That cannot fly.


Courage is the price that
Life exacts for granting peace.
The soul that knows it not, knows no release
From little things:
Knows not the livid loneliness of fear,
Nor mountain heights where bitter joy can hear
The sound of wings.

From Time’s obscure beginning, the Olympians
Have, moved by pity, anger, sometimes mirth,
Poured an abundant store of missiles down
On the resigned, defenceless sons of Earth.
Hailstones and chiding thunderclaps of Jove,
Remote directives from the constellations:

Aye, the celestials have swooped down themselves,
Grim bent on miracles or incarnations.
Earth and her offspring patiently endured,
(Having no choice) and as the years rolled by
In trial and toil prepared their counterstroke –
And now 'tis man who dares assault the sky.
Fear not, Immortals, we forgive your faults,
And as we come to claim our promised place
Aim only to repay the good you gave
And warm with human love the chill of space.

Thomas Bergin. Etched into an instrumentation panel on the Transit Research and Attitude Control (TRAAC) satellite launched on 15 November 15 1961, Bergin’s poem was the first literary work to leave Earth. It continues to circle the Earth at an altitude of about 600 miles. It is a message to the gods that declares the end of their belligerent influence!

I laugh more than other men
I look up an see more than they,
I know how the clouds feel,
What it's like to have the blue in my lap,
to look down on birds,
to feel freedom in a thing called the stick.

Who but I can slice between God’s billowed legs,
and feel then laugh and crash with His step
Who else has seen the unclimbed peaks?
The rainbow’s secret?
The real reason birds sing?
Because I Fly,
I envy no man on earth.

Lord of the thunderhead and sky
You placed in us the will to fly,
You taught our hand speed, skill and grace
To soar beyond our dwelling place.

You shared with us the eagle’s view,
The right to soar as eagle’s do,
The right to call the clouds our home,
And grateful, through your heavens roam.
May we assembled here tonight,
And all who love the thrill of flight,
Recall with twofold gratitude,
Your gift of wings, your gift of food.

Father John W. MacGillivray, a Roman Catholic priest from the fishing village of Arisaig, Nova Scotia. He was an active pilot and a chaplain in the Royal Canadian Air Force.

An Irish Airman Foresees His Death

I know that I shall meet my fate
Somewhere among the clouds above;
Those that I fight I do not hate
Those that I guard I do not love;
My country is Kiltartan Cross,
My countrymen Kiltartan's poor,
No likely end could bring them loss
Or leave them happier than before.
Nor law, nor duty bade me fight,
Nor public man, nor cheering crowds,
A lonely impulse of delight
Drove to this tumult in the clouds;
I balanced all, brought all to mind,
The years to come seemed waste of breath,
A waste of breath the years behind
In balance with this life, this death.

W. B. Yeats. Written in 1918, first published in the Macmillan edition of The Wild Swans at Coole, 1919. Wishing to show restraint from publishing political poems during the height of WWI, Yeats withheld publication of the poem until after the conflict had ended.

The airman in the poem is believed to be Major Robert Gregory, a friend of Yeats and the only child of Lady Augusta Gregory. In the 1990 movie Memphis Belle the character Sgt. Danny Daly recites the poem, omitting the lines referring to Ireland.

“You’re on your own” was all he said
that day long years ago—
So long his name and face are lost
in memory’s afterglow;
Nor do I recollect of pride or joy
or doubt or fright
Or other circumstance which marked
that time for solo flight;
The cryptic words alone endure. He
said, “You’re on your own,”
And down through time I’ve found it so
—the test’s to walk alone.

Not that one choose to draw aside in
churlish mein or vein
From common lot of what life holds of
pleasure, toil or pain
But that the call’s to rise and cruise
alone with dreams unshared
Or plan alone for some far goal for
which none else has cared,
Or fight alone for what you hold is
worth a warrior’s strife
And ask no gain or fame or aught beyond the joy of life.

I owe a quenchless debt to him who bade
me seize my fate
And hang it on the faith that I to it
was adequate
For when he said, “You’re on your own”
and sauntered on away
I knew that here in four short words
was youth’s first judgment day!
—Not wit to learn, not test of skill,
not pride to satisfy
But will to walk down life in faith that
life is theirs who try.

Here are the Amazon links to some great books on Aviation Poetry: 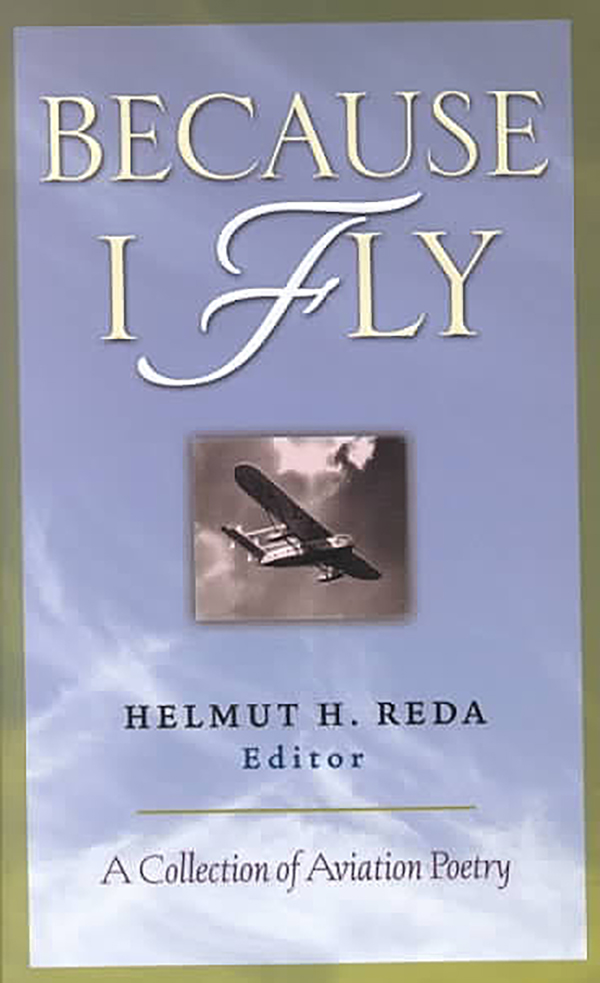 Didn’t find what you were looking for? There are many more quotes on my Magic & Wonder of Flight page and the Bird page. Slipping the Surly Bonds — High Flight has it’s own page. Or try a seach of the entire database: